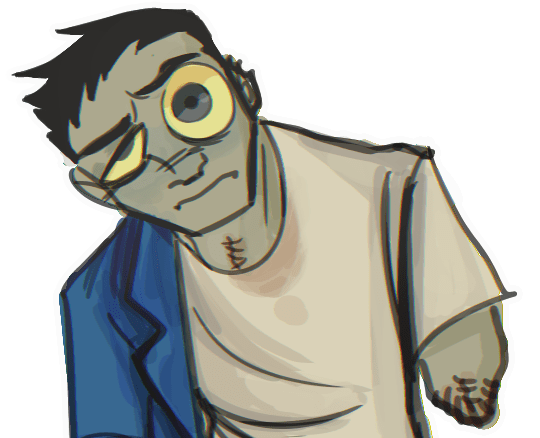 Height
5' 6" (169 cm)
Weight
92 lbs (42 kg)
Eyes
Grayish,yellowish sclera. The right pupil has lighter color and is smaller
Hair
Black
Complexion
green and a mix of blue in some areas
Orientation
?
Origins
Probably comes from some place of north america

Hobbies
Complaining,eating things he shouldn't
Favorite Food:
None and all
Voice
Tired voice,very energetic when he’s angry.Sometimes you can hear a bit of a mexican accent.
Ephraim Winslow (Latin American dub)

He doesn't remember a lot,maybe he remember being carried and buried. And then everything went black.

He just remembers his name,Mickael...He really,really doesn't want to live anymore, every goddamn second on this piece of land is pain. So,along with Thomas,they're searching some way to free his soul or either way he'll be trapped here for the rest of the times.

Facial features: He’s clearly tired and notable malnourished. His right eyelid and ear were partially eaten by bugs
Has anisocoria. The smaller pupil is currently blind and looks like a cataract.

Fashion: Uses the same clothes everyday,thought they’re damaged and dingy. The blue tshirt was kindly provided by Thomas and previously adquired on a thrift store almost five years ago.