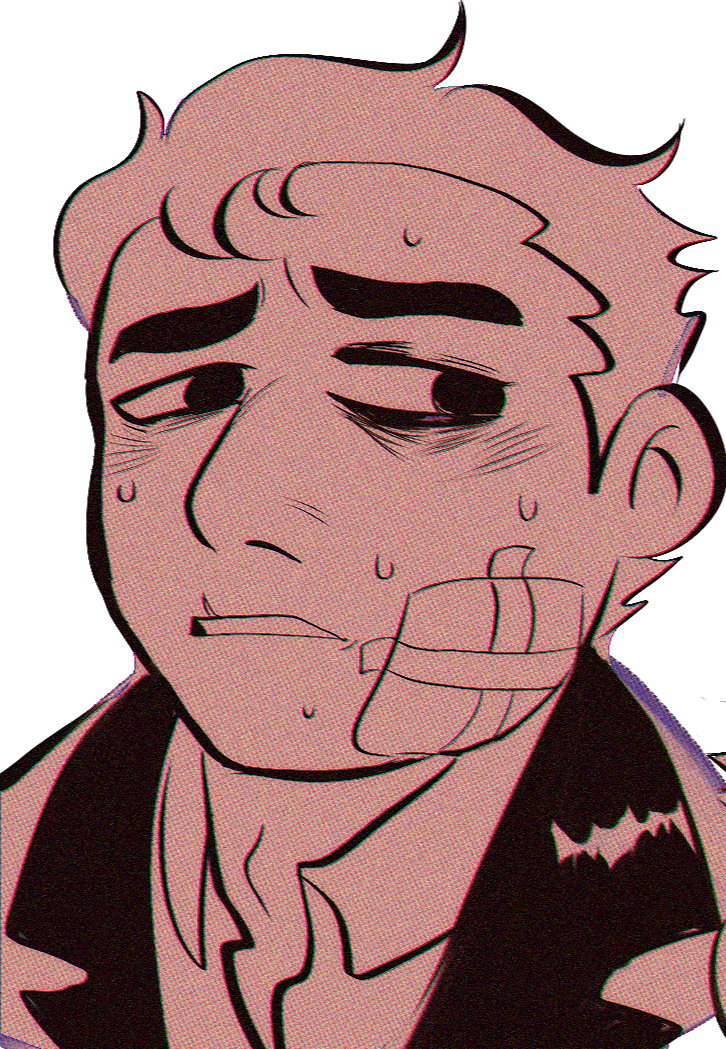 Height
6' 9" (205 cm)
Weight
209 lbs (95 kg)
Eyes
Brownish orange-brown
Hair
Black (dyed),Pale blond (naturally)
Complexion
Desert sand
Orientation
Bisexual
Origins
Scottish half-blood gryphon. Alex family was a small group of magic creatures (Griffons) who lived on the south region of scotland and used to disguise themselves as humans.
Despite their origins,Alex has no capacity to transform or use magic. Apart from that, is hella strong and pretty big. They don't really like conflicts and dreams to live a peaceful life.

Hobbies
Painting,smoking,playing imaginary scenarios in their head
Favorite Food:
Jicamas with chili,melon,sandwiches
Voice
Talks in a very soft and sweet manner when relaxed,actually has a pretty deep voice. Has a clear scottish accent


Alex is a 26 years old ex-mobster that been living a pretty unstable life since they were 14 y/o.
Alex was one of Thomas best friends,at least they consider it that way. After helping Thomas on his scape they never had news about each other ever again. Until they reunited again after 5 years when casually encountered Thomas & Mickael doing some errands on the city he lived and worked!

After knowing their situation, Thomas finally convinced Alex, this time for real, to leave that life behind so now they're more like a runaway. The thing Alex wishes the most is to see their family again,as they hasn't seen them in 12 years.

Alex lived in the same psychiatric facility as Thomas. Alex had preferential treatment unlike the other people there because they were the illegitimate child of a kinda important politician out there and since they did not want his image to be stained, they gave Alex family the excuse that they were going to take care of them when his parents came for help when some early psychological problems manifested on Alex, so that no one would dare to speak about anything.

Anyways,the personnel didn't treat Alex bad in that place or anything,but yeah,they weren't able to know the world outside so grew with a incorrect vision of it. Alex met Thomas the first day and they got along really well to the point of becoming best friends. Even more than that...
For certain reasons Thomas ended up running away after a year and a half, Alex already knew, even helped him,also. Thomas invited Alex to leave and search a place to live together but Alex was scared of consecuences,and of the world outside. The real world. They promised to see each other again one day.
Alex quickly regretted not fleeing with him.

A short time later,one year and a half or something,the personnel closed the psychiatric center and transferred Alex to a city that he was nearby with the excuse of relocating and so on,it was a lie. The personel threatened that they could not talk about anything they've seen. Before closing the center,some people were doing some ...bad things...experiments on the patients (Same reason of why thomas runned away,he had a very bad luck and was selected to participate in one of these).
Anyways,if Alex behaved well soon they would take him to see his family. Pure lies. Nobody helped Alex.
They were sleeping on the street for some days and ended up getting in a local criminal organization. Alex asked for help and the people there saw them as a good recruit because they did no asked questions,was very naive,and easily intimidated by people on a highest position of power.

As time passed,Alex was just becoming a carcass of their old self,people shutted of his will and Alex just did as they were told. They becomed emotionally constipated and has a lot of repressed feelings. Sometimes fears forgetting their objetive but maybe it's already too late.

Facial features: Has a pretty soft face,his skin is pretty sensible so marks don't go away easily. Has a visible scar on his lip.
On their mobster phase Alex got some pretty bad bruises on their eye,and one terrible laceration on the cheek.

Hair: During their early years used their hair a bit long,'til the neck.
Later it was black-dyed and trimmed,they forget to comb so its usually a bit unkept

Body: He has a pretty heavy looking body,isn't easy to not notice his presence when he appears
Later they get a lot of scars on all of his body,mostly on the back

Fashion: He uses pretty simple clothes,usually a white button shirt,black pants and a pair of black work shoes,though the kind of style he likes it's a more childish one,with overalls,bright colors and comfy baggy clothes