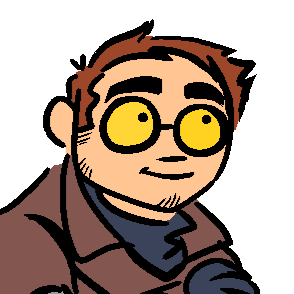 
Thomas Campbell is a 30 year old not-so-known alchemist,merchant & delivery man (formerly Medical examiner/substitute teacher) He has this tiny cottage/bussines in the woods,just outside the city. He’s creepily enthusiastic & weirdly optimistic and likes to talk a lot! A lot. He’s very self-absorved,very curious and has a strange fixation to death,because of that he studied forensics and today one of his hobbies is practicing taxidermy and doing clandestine postmortem examinations. Other of his hobbies is collecting all kind of things,his predilect things are vintage trinkets and shiny rocks. He also likes to buy a lot of clothes! Most of them are from the thrift store. When he’s not doing all those things he’s busy fishing in the river near his house.

Has two crooked teeth on the right side of his mouth due not being able to remove one of his wisdom teeths.

Hair: Has a short straight hair,cutted and brushed by himself.

Body: His body type would be more like a bulky one. He's strong and has a good condition.

Fashion: His work clothes are usually a thick brown leather jacket,lightweight pants and some heavy strap boots with a steel cap & sole
When he's in home he wears the same excepting the jacket.